OpenTAP comes with a number of predefined result listeners, summarized in the following table.

When extending the ResultListener class, the following methods can be overwritten:

These methods are called by OpenTAP and are guaranteed to be called in a certain order:

To illustrate the sequence of the above-mentioned methods, consider the following figure: 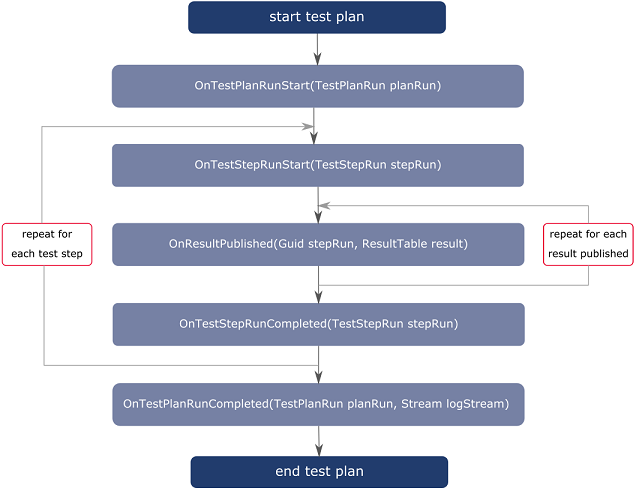 The five methods described here run on a separate thread, and do NOT run synchronously with the test plan. That is important because the design of this class is to handle results, but NOT specifically to use the above methods to control external operations. The non-synchronous behavior was designed to allow faster throughput.

It is possible to abort the test plan execution in case the result listener fails or encounters an error. This is done by calling the PlanRun.MainThread.Abort() method.

Interacting with the predefined databases or interfacing to an unsupported database requires DB knowledge.

The TestRun table gets a new entry for each executed step in the test plan. The PlanRunID table points at the TestRun entry of the test plan run. The ParentRunID points to the entry of the parent step's run (if there is any). Associated with each TestRun, you can store multiple result series in the ResultSeries table. This points to the ResultType table, which contains additional information about the result data such as titles for the data columns/axis (x,y,z). The TestRun table points via the TestRun2Params to a range of different parameters in the Params table. These parameters become the public properties of the test step when the result series are generated.

Lastly, ResultSeries is pointed to by the Results table, so that each row in ResultSeries can have many results belonging to it.

The OpenTAP database schema consists of 11 tables, shown in the following diagram. You should explore the schema of the sample databases before attempting to write a new result listener targeting a new database. 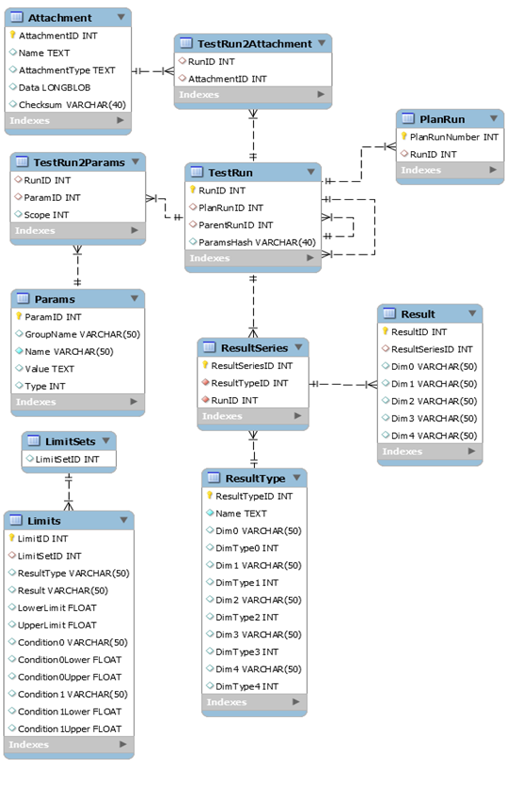