OpenTAP is a software solution for fast and easy development and execution of automated test and calibration algorithms. These algorithms control measurement instruments and devices under test (DUTs). By leveraging the features of C#/.NET and providing an extensible architecture, OpenTAP minimizes the amount of code needed to be written by the programmer.

OpenTAP offers a range of functionality and infrastructure for configuring, controlling, and executing test algorithms. OpenTAP provides an API for implementing plugins in the form of test steps, instruments, DUTs and more.

OpenTAP consists of multiple executables, including:

Steps frequently depend on DUT and Instrument plugins. The development of different plugins is discussed later in this document.

The illustration below shows how OpenTAP is central to the architecture, and how plugins (all the surrounding items) integrate with it. 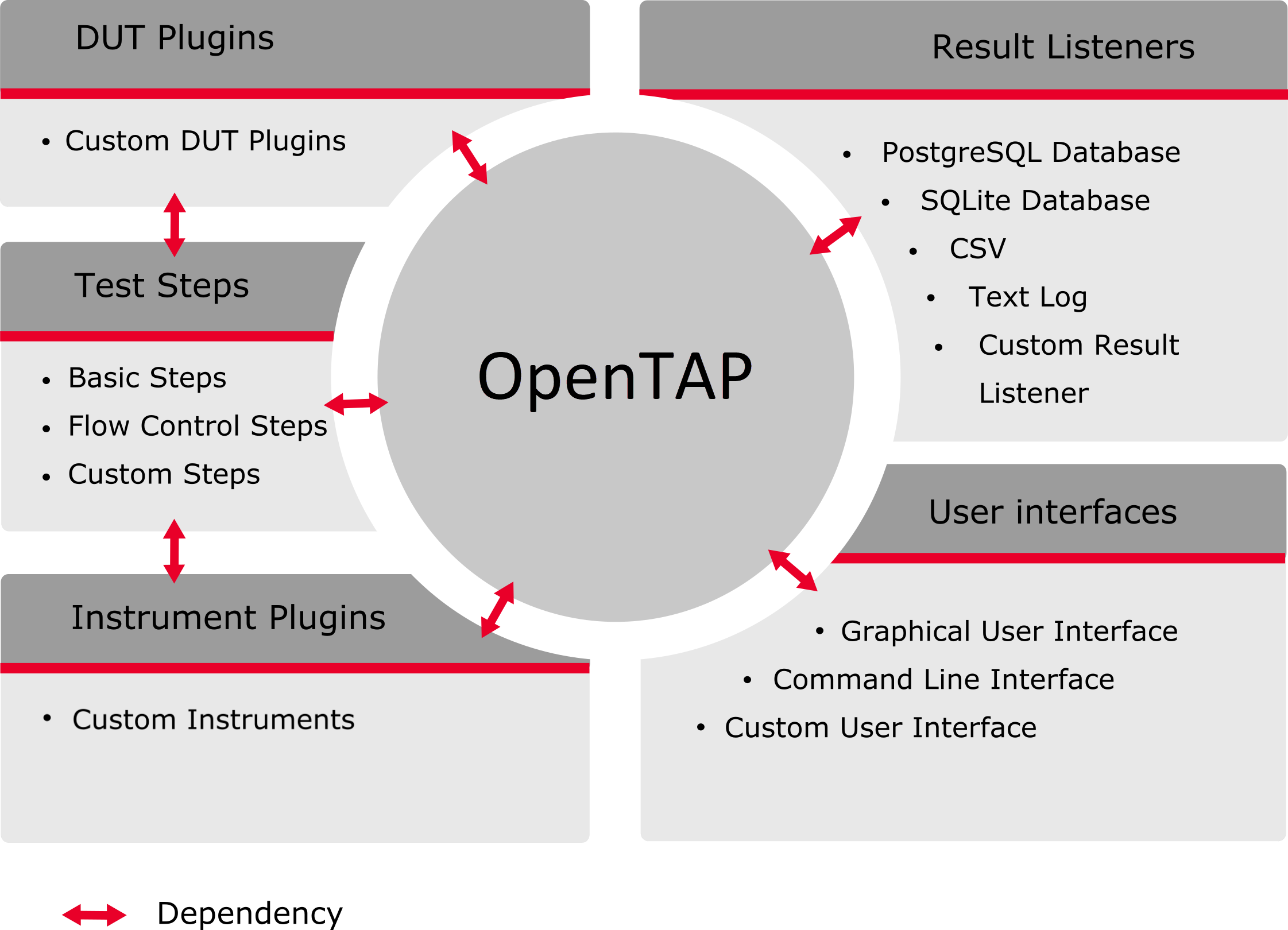 The OpenTAP assembly is the core and is required for any OpenTAP plugin. The most important classes in OpenTAP are: TestPlan, TestStep, Resource, DUT, Instrument, PluginManager and ComponentSettings. OpenTAP also provides an API, which is used by the CLI, and other programs like the editor GUI.

If a graphical user interface is needed you can download the Keysight Test Automation Developer's System (Community or Enterprise Edition). It provides you with both a Software Development Kit (SDK) as well as an Editor GUI

The OpenTAP CLI is a console program that executes a test plan and allows easy integration with other programs. The CLI has options to configure the test plan execution, such as setting external parameters, configuring resources and setting meta data.

The OpenTAP API allows a software to configure and run a test plan. A help file for the C# API (OpenTAPApiReference.chm) is available in the OpenTAP installation folder. Examples on how to use the OpenTAP API can be found in the TAP_PATH folder.

An essential feature of OpenTAP is its flexible architecture that lets users create plugins. OpenTAP plugins can be any combination of TestStep, Instrument, and DUT implementations. Other OpenTAP components such as Result Listeners and Component Settings are also plugins. By default, OpenTAP comes with plugins covering basic operations, such as flow control and result listeners.

Plugins are managed by the PluginManager, which by default searches for assemblies in the same directory as the running executable (the GUI, CLI or API). Additional directories to be searched can be specified for the GUI, the CLI and the API. When using the API, use the PluginManager.DirectoriesToSearch method to retrieve the list of directories, and add any new directories to the list.

OpenTAP plugins and non-OpenTAP files (such as data files or README files) can be distributed as OpenTAP Packages. OpenTAP Packages can be managed (installed, uninstalled, etc.) using the Package Manager (described in more details later in this guide).

To use OpenTAP to its full potential, developers must understand the control flow of a running test plan. Several aspects of OpenTAP can influence the control flow. Important aspects include: 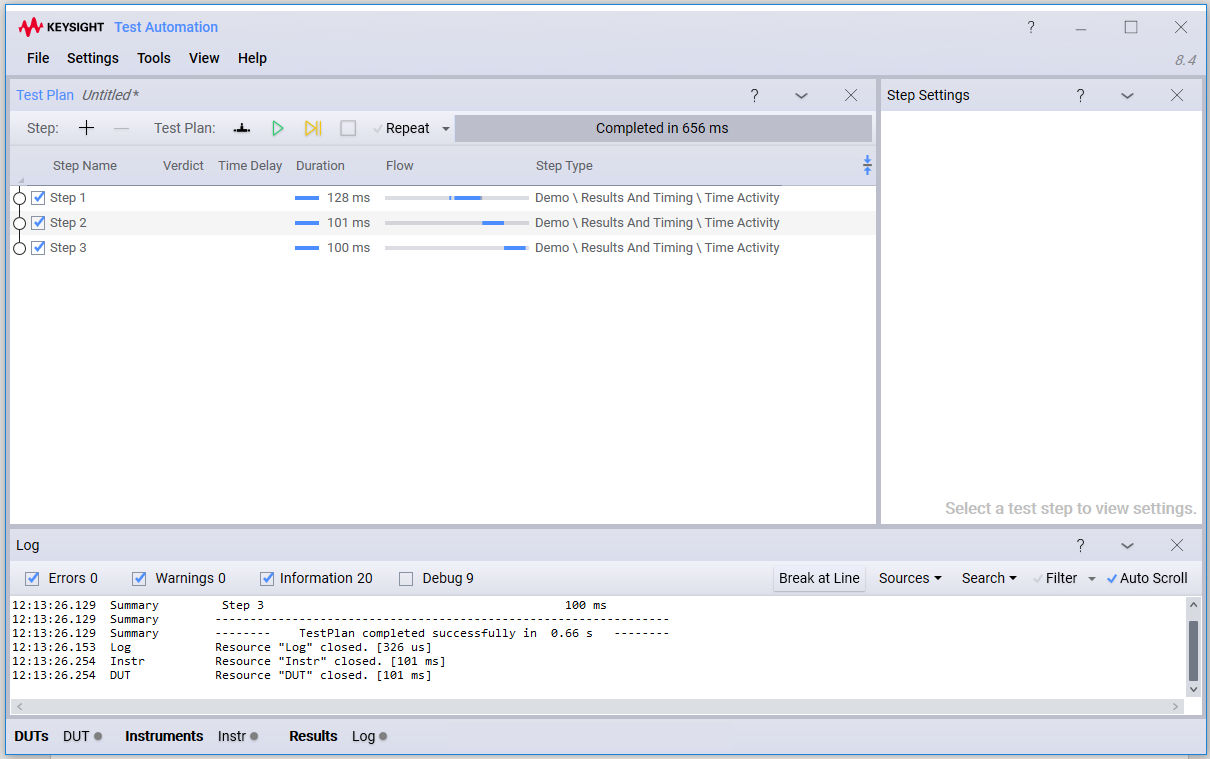 The test plan has three test steps, in succession. In this test plan, none of the steps have child steps. A more complex example, with child steps, is presented later in this section. The test plan relies on the resources DUT, Instr. and Log to be available and configured appropriately. The following figure illustrates what happens when this test plan is run: 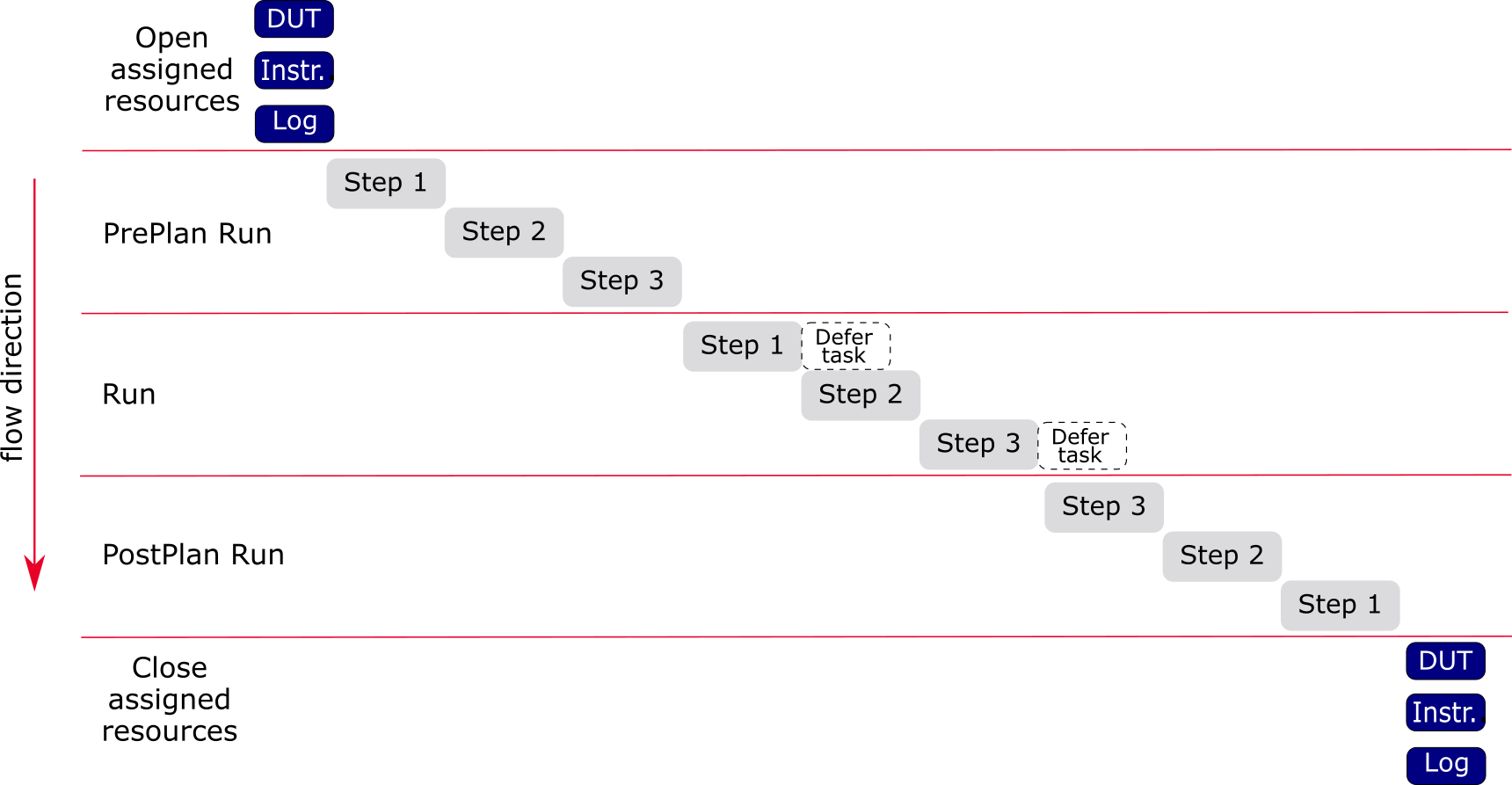 In the Open assigned resources phase all DUTs, instruments and configured result listeners are opened in parallel. As soon as all resources are open the PrePlanRun methods of the test steps execute in succession. This is followed by the execution of the Run methods where all test steps are run one at a time. It is possible to allow a test step to run code after its run is completed. This is done by defining a defer task for the test step. To learn more about defer task see the Plugin Development folder under Packages/SDK/Examples, located in the OpenTAP installation folder.

The test plan below illustrates how child test steps are handled:

The methods in the test steps execute in the following order: 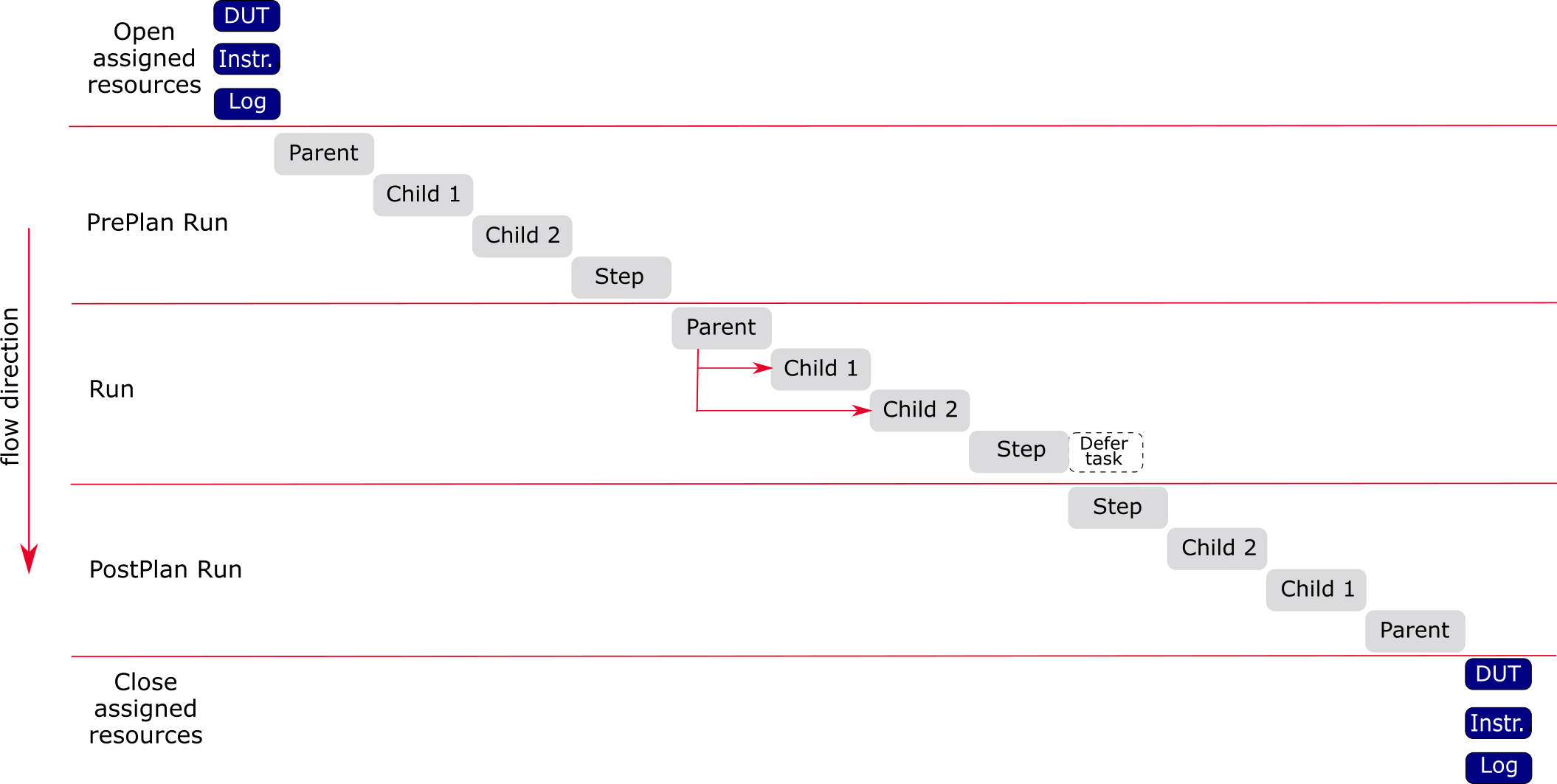 Similar to the previous example, test plan execution starts with the Open assigned resources phase, followed by the execution of the PrePlanRun methods. The PreplanRun methods are executed in the order of the steps in the test plan. Next, the Run method of the Parent step is executed. The Parent step controls the execution order of the Run methods of its child steps. The example above shows the case, where Parent calls its child steps sequentially. Following this, the run method of Step is executed. The PostPlanRun methods are executed in reverse order of placement in the test plan, starting with Step 2 followed by Child2, Child1 and finally Parent. In the last step all assigned resources are closed.

Note that the above examples are very simple. A more advanced test plan may incorporate flow control statements to change execution flow. For example, adding a Parallel test step as a parent to child test steps will make the test steps run in parallel. This only affects the run stage, the other stages remain unchanged.

Editable OpenTAP step settings can be marked as External. The value of such settings can be set through the Editor GUI, through an external program (such as OpenTAP CLI), or with an external file. This gives the user the ability to set key parameters at run time, and (potentially) from outside the Editor GUI. You can also use the API to set external parameter values with your own program.

You may want to avoid the time required to open resources at each test plan start. To do so, open the resources by using the Connection button:

Resources opened manually remain open between test plan runs. This eliminates the time required to open and close them for each test plan run.

Note: You must ensure that the resources can be safely used in this manner. For example, if a Dut.Open configures the DUT for testing, you may need to keep the default behavior of opening the resource on every run.

Test step hierarchies can be built, and attributes set, to allow certain steps to have child steps. This hierarchical approach, and the possibility of communicating with one or multiple DUTs from a single test step, allows for a variety of test flows.

The following figure illustrates four different approaches where both sequential and parallel execution is used. The upper part of the illustration is the flow; the lower part is the test plan execution showing the corresponding TX and RX test steps. 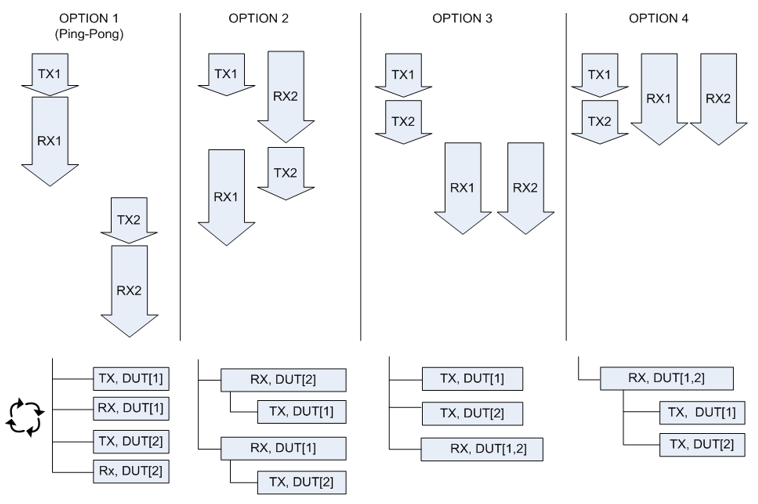 Note: All the above is highly DUT and instrument dependent.